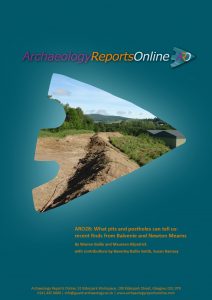 Recently published research from two sites at opposite ends of Scotland reveals new evidence for Bronze and Iron Age landscapes.

During archaeological investigations in advance of development at the Balvenie Distillery in Moray in 2014 and a housing development at Newton Mearns in East Renfrewshire in 2012, GUARD Archaeologists encountered pits and post-holes. These are relatively common on archaeological sites, and in some cases may be the only evidence of early settlement, but interpretation can be difficult. The post-holes and pits from these two sites were found in the lower contours of their respective upland areas, above 120 m OD. None of these was directly connected with other settlement remains and associated material culture was rare. However, radiocarbon dates reveal these features reflect activities during the Bronze Age and Iron Age periods and indicate that later prehistoric material can be found in upland areas even when significant changes to the landscape have occurred.

The alteration of the local topography at Balvenie, by the construction of a railway line in the nineteenth century and other ground-works in the middle to late twentieth century led to the reshaping of the hill slope. The pits and post-holes that survived indicated that the landscape had been topographically different when used by Bronze Age and Iron Age communities. The evidence indicates the seasonal gathering of hazel nuts for food, the possible cultivation of cereal crops, and certainly the processing of barley and even oats. It seems that barley has a long tradition of cultivation and use in this area and that Glenfiddich barley still plays a major role in the local economy, most significantly for the production of whisky. 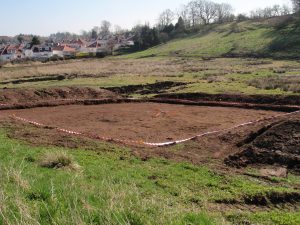 The discovery of a pit with material cultural evidence in an area of rough grazing in Newton Mearns increases the sparse number of known prehistoric sites in this area. It is unlikely the area suffered the scale of landscape changes, seen at Balvenie, but changes will have taken place in vegetation cover and in the use of the land. The pit, together with the presence and of clay/daub and a possible quern fragment, indicates that the landscape was settled and used during the early Bronze Age, with nearby hazel, oak and willow woodland. The pit produced one of the earliest radiocarbon dates obtained from this area. Its presence suggests contemporary settlement may be preserved close by.

Through these two limited views of the past, our knowledge of human activities in these upland areas is increased. Even though the material cultural remains were sparse, the environmental evidence provided not only radiocarbon dates but suggest prehistoric landscapes very different to that of today.

The full results of this research, which was funded by William Grant and Sons Distillers Ltd and Stewart Milne Homes, ARO28: What pits and postholes can tell us: recent finds from Balvenie and Newton Mearns by Warren Bailie and Maureen Kilpatrick is freely available to download from the ARO website – Archaeology Reports Online. 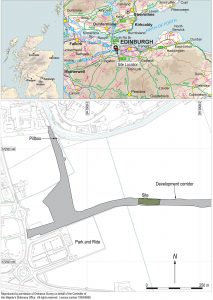 Recently published research by Bob Will of GUARD Archaeology reveals the discovery of the complex history of settlement at a place in the Lothians of Scotland, from the Neolithic through the Bronze Age and Iron Age into the early medieval period.

This work was undertaken at Gogar Mains to the west of Edinburgh in advance of the construction of the Edinburgh Tram Scheme linking Edinburgh Airport with the city centre. Prior to the excavation several prehistoric archaeological sites were known in the immediate vicinity including cropmarks of two possible settlements. Within the wider locality, there is a wide range of known sites, including to the north the ‘Cat Stane’, with its early medieval Romano-British latin inscription and associated long-cist cemetery, as well as prehistoric remains consisting of Neolithic pottery and flint tools. There are also references to another long-cist cemetery to the south while further to the north is the Craigie hillfort and to the west is Huly Hill, an early Bronze Age mound and Iron Age Chariot burial as well as a medieval settlement. 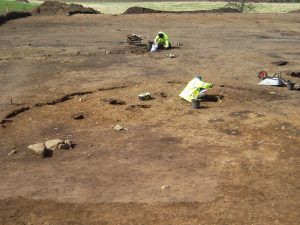 The excavation was initially centred on the concentration of archaeological features revealed during an earlier evaluation. Once the topsoil was stripped, over 150 features were investigated, revealing seven discrete areas of activity that contained a range of botanical and artefactual evidence and radiocarbon dates that demonstrate that the site was in use over a long span of time between the early fourth millennium BC and the eighth century AD.

Neolithic activity was represented by pits containing hazel nutshell, flint tools and pottery sherds from carinated bowls, probably the debris from a Neolithic settlement. More clearly defined evidence for a house structure was apparent in the Bronze Age, in the form of a ring groove with internal post-holes, adjacent to a palisaded enclosure but there was little artefactual evidence and the dating of these structure derives solely from radiocarbon dates. These dates suggest two phases of construction or use of the palisade. There was little evidence for structures within the palisade, although several post-holes may indicate an internal supporting structure, or fence lines indicative of pens for livestock. 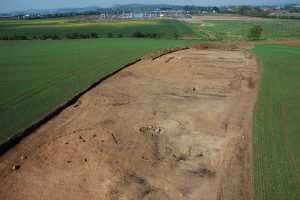 Two truncated roundhouses near the north end of the site were dated to the Iron Age. An associated fragment of a miniature quern was recovered; these tend to be found in the east of Scotland during the Iron Age. The final phase of activity on-site comprised the remains of two corn-drying kilns, dated to between the sixth and eighth centuries AD, that survived as oval pits containing considerable quantities of burnt and charred cereal grains. Associated with the better-preserved kiln was a rim sherd of coarse pottery and two fragments from a rough quern.

While the archaeological investigations provided evidence for occupation of this place over a long period of time, it was surprising that little evidence for settlement from the Roman occupation of southern Scotland was encountered, considering the presence nearby of a Roman fort, milestone and temporary camps. The archaeological remains from the excavation nevertheless provide a palimpsest of prehistoric and early medieval occupation and support similar occupation and settlement evidence from the wider region. The early medieval date for the corn-drying kilns provides direct evidence for settlement and agriculture, as well as a domestic setting for the long-cist cemetery at Catstane to the north. Together with another nearby long-cist cemetery to the south and contemporary field boundaries near Gogar Church, the results are combining to gradually fill out a picture of sustained settlement and agriculture in this area of the Lothians during the early medieval period.

The full results of this research, which was funded by the City of Edinburgh Council, Excavations to the West of Gogar Mains, Edinburgh by Bob Will with Heather F. James is freely available to download from the Scottish Archaeological Internet Reports website, published by the Society of Antiquaries of Scotland.