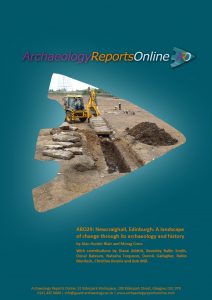 Archaeological investigations coupled with historical research of Newcraighall on the south-east edge of Edinburgh reveal a complex story of land use changes from prehistory to the present day.

Between 2011 and 2016, GUARD Archaeology teams led by Alan Hunter Blair undertook a series of surveys and excavations across land that had previously been part of the policies of Brunstane House and and Newhailes House. While the earliest activity encountered comprised groups of pits dating to the late Mesolithic/early Neolithic, late Neolithic and Bronze Age, the majority of features dated from the medieval and post-medieval periods through to modern times. 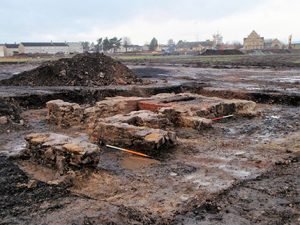 These included various sized coal pits or shafts, and the foundations of four colliery buildings, arranged around a now infilled mineshaft on the southern site. Elements of a designed landscape associated with Brunstane House included a ha-ha that traversed the northern site. The presence of several large culverts may also have connections with both landscape alterations and the coal-mining industry. Fragments of curved and linear ditches appear to be remnants of earlier field systems dating from the medieval and post-medieval periods and associated with extensive remnants of broad rig cultivation found across the two areas. 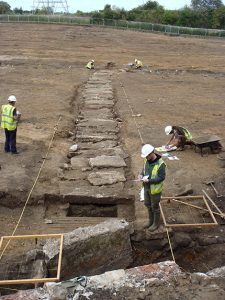 The historical research demonstrates the complexities of landownership with evidence of the development of coal mining and coal ownership and the social and economic realities of the times. Examination of papers relating to Brunstane House showed that they had direct bearing on the understanding and dating of the landscaping features and other groundworks, including changes to the estate boundaries and the runrig system. A labourer’s diary from the winter of 1735-6 was an especially interesting find from the point of view of what work was undertaken on the estate, by whom and for how much.

This project shows the value of combining two subject areas together, from their partial bodies of evidence, to produce a much more rounded view of the life of the times from the landowner to the coal miner during the post-medieval and early modern periods.

The full results of this research, which was funded by Barratt & David Wilson Homes East Scotland and Avant Homes, ARO29: Newcraighall, Edinburgh: A landscape of change through its archaeology and history by Alan Hunter Blair and Morag Cross is freely available to download from the ARO website – Archaeology Reports Online.