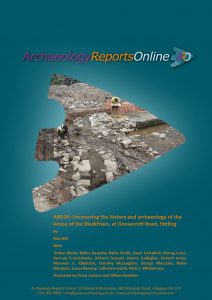 Investigations on the outskirts of medieval Stirling discovered the foundations of the medieval Dominican friary.

The archaeological excavation was carried out by GUARD Archaeology Ltd in 2014 in advance of re-development of land at Goosecroft Road by Cromwell Property Group (formerly Valad Europe) on behalf of the Stirling Development Agency. The foundations of substantial medieval stone walls and finely carved architectural fragments were revealed, belonging to the friary known to have occupied this area of the medieval burgh. Historical research reveals that this friary belonged to the Dominican Order – the Blackfriars – for over three hundred years, from 1233 to the Scottish Reformation in 1559. 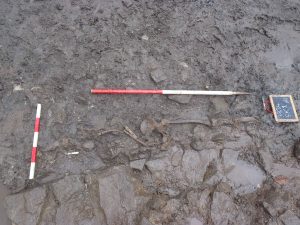 Remains of skeleton during excavation

The archaeological finds included what remained of the skeleton of a young man. ‘He had been carefully buried in accordance with medieval Christian burial rites within the precincts of the friary,’ explained Maureen Kilpatrick, who analysed the human remains. ‘He was placed on his back in an extended position and orientated east/west, with the head at the west end and the lower arms placed towards the pelvis. No skeletal pathology was noted on the skeleton, although the remains were very fragmentary, and any trace of disease may have been lost.’

The burial is consistent with other known medieval burials with regards to burial orientation and the positioning of the lower arms towards the pelvis, such as those found at other friary sites in Scotland at Aberdeen, Linlithgow and Perth. The arms placed across the body, whether across the chest or pelvis, have been interpreted as evidence of a body being firmly wrapped in a shroud and with the absence of any evidence for a coffin is more than likely the mode of burial of this individual. The location of the burial within the foundation trench of a wall is more unusual, although a similar burial of a young adult male buried within the south foundation wall of the nave was also discovered at the Carmelite friary in Linlithgow. 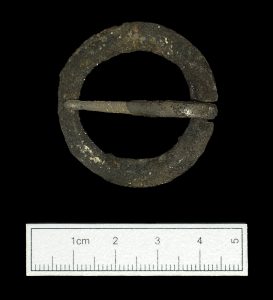 While excavations at other medieval friary sites in Scotland have revealed burials of men, women and children suggesting the local populace was interred in friary grounds, the archaeological evidence suggests that this young man was a friar himself, which is usually quite difficult to demonstrate. However, as friars were buried in their habits, buckles found near the pelvis indicate those individuals being friars of orders such as the Dominicans, as their rule required them to wear a belt with a buckle, rather than a rope cincture worn by other orders such as the Franciscans (the Greyfriars). The finding of a 13th/14th century bronze belt buckle in front of the pelvic area of this individual and traces of mineralised textile on the inner edge indicating it was fastened against clothes therefore suggests that he was a friar rather than simply a local individual. Furthermore, his skeleton was radiocarbon dated to AD 1271 – 1320 so it is possible that this friar was a witness to some of the most significant events of the Scottish Wars of Independence during late 13th and early 14th centuries, not least the battles of Stirling Bridge and Bannockburn.

‘The approximately 326-year existence of the friary gleaned from historical records is now corroborated by the new archaeological evidence,’ said Bob Will who led the excavation. ‘Pottery sherds dating to this period derive from cooking vessels and jugs from different British regions as well as Continental Europe. The Blackfriars of Stirling had access to luxury table goods from around the North Sea, foodstuffs such as figs and raisins and wine. The friary as well as the burgh of Stirling was well positioned to receive imports, which may have been brought to land at Cambuskenneth Abbey which lies on the River Forth and was then navigable from the sea.’ 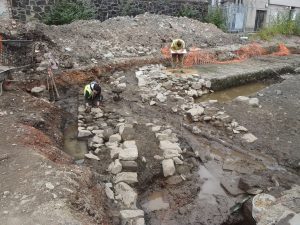 One of the walls discovered during the excavation was likely to be a boundary wall for the friary that was replaced or reinforced by another with a drain, the latter possibly related to a lavatorium or kitchen. Two window glass shards and two window tracery fragments hint at the possibilities of a leaded glass window in an ecclesiastical building dating to the late fourteenth century. However, due to subsequent development of this area of Stirling, not least the robbing of stone from the friary after its dissolution, only part of the layout of the friary is known.

The full results of this research, which was funded by the Stirling Development Agency, ARO30: Uncovering the history and archaeology of the house of the Blackfriars, at Goosecroft Road, Stirling by Bob Will is freely available to download from the ARO website – Archaeology Reports Online.