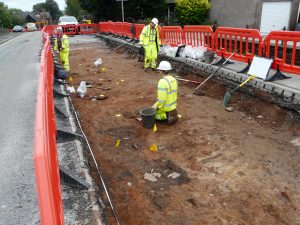 A team of GUARD Archaeologists have discovered the remains of a Roman vicus settlement just outside the Roman Fort of Bravoniacum.

The team from GUARD Archaeology Ltd were working with Highways England and Amey Consulting during improvement works to the A66 at Kirkby Thore in Cumbria. To minimise disruption to traffic along the A66, the work was undertaken at weekends and overnight.

‘Not only have we revealed the foundations of the Roman road,’ said GUARD excavation director John-James Atkinson, ‘but we have revealed traces of timber buildings that lay adjacent, to the south-west of the fort. While the timber has long since rotted away, the construction of these buildings has left post-holes and pits from which we have recovered a variety of Roman pottery sherds.’

The Roman pottery sherds include Samian pottery from Roman Gaul which was once used as fine tableware for rich and well-connected soldiers and citizens, amphorae which may have once held wine or olive oil from the Mediterranean as well as more common greyware and coarse ware that was made in Roman Britain itself.

‘The pottery dates from the first to the fourth century AD,’ added John-James Atkinson, ‘which neatly ties in with the known occupation of the fort.’

The GUARD Archaeologists also encountered a grave burial. While this was left unexcavated, to be preserved in situ, its exact location was surveyed in and samples taken so that it can be dated.

The Roman fort of Bravoniacum was once garrisoned by a squadron of Syrian archers. This unit of the Roman army was in the fourth century AD under the overall command of the Duke of the Britains, who from his base in York was responsible for keeping the northern frontier secure and the citizens of the four provinces within Late Roman Britain safe from Pictish raids. So the importance of keeping the road open and accessible was as important then as it is now.