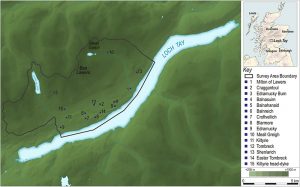 Research by GUARD Archaeology has just been published, presenting the results of the Ben Lawers Historic Landscape Project, a multi-disciplinary project carried out between 1996 and 2005 in the Central Highlands of Scotland.
The Ben Lawers Project had wide-ranging aims based around developing a project that would enable a greater understanding of the last thousand years of human history across an area of upland landscape on the north side of Loch Tay. It became apparent from the very first excavation season that the laudable goal of restricting the project to the second millennium AD would be almost impossible to achieve. The very nature of the landscape which formed the study area, with its limited flat agricultural land and steep slopes stretching towards the massive peaks of Tarmachan, Lawers, Ghlas, An Stuc and Meall Greigh, would conspire to defeat any such policy. The combined factors of topography, hydrology and geology encouraged the use of particular points in the landscape through time.

Locations that were suitable for early inhabitants to hunt, build houses or bury their dead would also be the best for future generations to use in similar ways. The project, throughout its nine years of existence, revealed evidence for this palimpsest of activity on a regular basis. The chronological depth of activity exposed during the project thus allowed the processes of change, expansion and retraction of settlement to be understood within a longer timeline of human occupation.

By the end of the 2nd century AD, abandonment of hut-circles, homesteads and crannogs on Loch Tay had occurred, and the project found no archaeological trace of human occupation during the next 250 years. The re-occupation of Eilean Breaban Crannog sometime after AD 420 was followed by a sequence of other occupation events, such as isolated, ephemeral features sealed under later buildings at Kiltyrie. Excavation at Balnahanaid revealed more structured evidence in the form of long cists and graves, which were contemporary with the early phase of occupation of Kiltyrie, and for the first time allowed the sample excavation of an annat site in Scotland. Annat or annaid sites have attracted little detailed study in archaeological terms and probably represent church-sites. The cemetery at Balnahanaid certainly provides a tantalising view of the period and hints at the working of silver, possibly in crucibles, a craft that might be associated with a church of some standing. Whatever its import, Balnahanaid was abandoned sometime after AD 780, although the reason is unclear.

From the mid 12th century, a prolonged phase of occupation becomes apparent within the landscapes of Lawers. It began with the reoccupation of Kiltyrie, which lasted until AD 1300 if not as late as the mid 15th century. The re-occupation of marginal fringes for agriculture is characteristic of the expansions in settlement-pattern associated with better weather conditions during the Medieval Optimum. This phase of expansion is evident in other upland areas of Britain, particularly the Scottish Borders, north-west England, Wales and more generally across north-west Europe. The Ben Lawers sites offer a glimpse of settlement forms during the Medieval Optimum, especially between AD 1150 and 1300. These find comparisons elsewhere in Perthshire and bear similarities in layout to contemporary sites excavated in the Western Isles. Towards the end of the 13th century, the climate began to change and it is likely that the colder and wetter conditions led to a retraction of permanent settlement from higher elevations in Perthshire, as it did elsewhere in Europe. The evidence from Ben Lawers suggests that this occurred in the decades immediately prior to 1300, but some use of sites may have continued into the 14th or possibly even the 15th centuries. What form this use took is less than clear, but it may have been seasonal.

Seasonal exploitation of the upland zone on Loch Tayside was certainly apparent from evidence recovered at shieling-sites investigated during the project. Whether transhumance was practised before this on Loch Tay is not clear from the physical or documentary evidence, although the term ‘shieling’ first appears in documents of the late 12th century in the Highlands. The archaeological evidence indicates that sites such as Meall Greigh may have been used on a seasonal basis from c 1400 until the late 18th century. This is supported by entries in the Breadalbane papers from the late 16th century onwards. For much of this period these documents, together with the excavation results, provide the only evidence for the later medieval and early post-medieval occupation of Loch Tay.

The excavation results also provide an interesting contrast with the published body of work on transhumance sites. Much of the work published to date relates to the Western Isles. The data produced as part of the Ben Lawers Project therefore offers the first comparative material for the whole of the highland massif. It also provides tangible evidence for the function and chronology of a range of structural forms, from the small, sub-circular or oval turf bothies to the elongated, sub-rectangular huts with their central entrances and stone-lined, turf-battered walls. The evidence from Ben Lawers indicates that both forms were concurrent features of the landscape, and the differences between them may reflect social forces at work in the pastoral zone. The evidence also highlights these structures’ lack of permanence, from the makeshift roofing arrangements to the lack of material culture and even, in some cases, the apparent absence of hearths. In dating terms the evidence suggests that the tradition was certainly active in the 16th and 17th centuries and probably came to an end towards the end of the 18th century, although occasional use may have extended beyond this.

By the beginning of the 18th century changes in construction materials and the detailed and meticulous record-keeping of the Breadalbane estate enabled the project once again to find evidence for the lives of the common people across the arable zone on Loch Tayside. Farquharson’s map of 1769 is particularly characteristic of this capturing of detail. The settlement-distribution mapped by Farquharson provides a snapshot of the form and layout of the pre-Improvement landscape prior to the wholesale changes initiated by the General Lease c 1800 and the abandonment of the infield/outfield system of agriculture. Ironically, although we can differentiate the locations of up to 65 18th-century settlement-sites from the sites occupied during the 19th century, it is not so easy to disentangle the archaeology of the physical remains and relate this to an underlying chronology. There is a clear lack of datable material for 18th-century occupation horizons. This, combined with the later occupation of sites (post-1769) and the wholesale remodelling of some settlements has created a complex mixture of 18th- and 19th-century cultural traits. In most cases this later occupation has obscured any trace of 18th-century use. This was certainly the case for many of the sites investigated as part of this project. Even in cases like Balnasuim, the later use of the site and subsequent robbing of stone left few traces of the building’s use during the 1700s.

In contrast, the expansion of the settlement pattern into the former outfield areas after the introduction of the General Lease in 1800 provides an entirely different body of evidence. These outfield sites were generally of a single phase, used for little more than a generation and accompanied by datable material culture. Sites like Kiltyrie provide a unique if fleeting view of early 19th century life in the Highlands, and some can even be related to particular individuals. The analysis of the ceramic and glass assemblages from these sites has permitted a clearer understanding of how people lived, what vessels they owned and when such objects became an essential part of everyday life. Contrasting these assemblages with material from other sites, such as Balnabodach on Barra and Easter Raitts in Badenoch has begun to address issues of trade and commerce over large distances and the role of peddlers and travellers in this process. By the 1820s the occupants of most of the outfield sites were beginning to struggle; the system on which the estate had placed such high hopes was failing. The evidence from the excavations supports the supposition that failure accelerated during the 1830s and the new system had all but collapsed by the middle of the century. The shrinking of the settlement-pattern and decline in arable production were inevitably matched by an inexorable fall in population throughout the rest of the 19th and into the 20th century. The remnant historic landscapes we see today along the north shores of the loch are testament to that demographic change.

‘Ben Lawers: An Archaeological Landscape in Time. Results from the Ben Lawers Historic Landscape Project, 1996–2005’ by John Atkinson has recently been published by the Society of Antiquaries of Scotland as Scottish Archaeological Internet Report 62