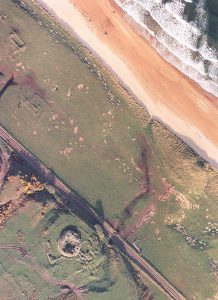 Photograph from air of Wilkhouse. The inn is at the top left and consists of two linked buildings. It has a large enclosure around it, which runs off photograph and indeed under the 1870s railway line. There is a late 18th century dwelling and enclosure below this. The Kintradwell broch stands on the raised beach at the bottom.

GUARD Archaeology will soon be undertaking an excavation in partnership with Clyne Heritage Societyand the University of Glasgow at the site of an inn just north of Brora in Sutherland.

This excavation seeks to investigate the remains of the inn here, which was in operation in the eighteenth century, and is believed to have been subject to the Clearances in the early nineteenth century.

The inn was identified as being of interest by Dr Donald Adamson, Chairman of GUARD Archaeology and honorary research affiliate, during his fieldwork for his University of Glasgow PhD thesis ‘Commercialisation, Change and Continuity: An Archaeological Study of Rural Commercial Practice in the Scottish Highlands’. A similar excavation outside Strachur was carried out in 2014, and you can see the results of this at archaeology Reports Online (ARO 17: Tigh Caol) available at www.archaeologyreportsonline.com.

The excavation will be directed by Warren Bailie of GUARD Archaeology, who directed the excavation at Strachur. Along with members of Clyne Heritage Society, many of whom have excavation experience through the society’s outstanding work at the sixteenth century salt works at Brora, archaeology students and local volunteers will be taking part.

There is one more available space for a student volunteer.