Soutra Hill: Bronze Age prominence on the edge of the Lothian Plain

Between 2009 and 2012, GUARD undertook a programme of archaeological assessment, evaluation, excavation and study of the summit of Soutra Hill in advance of the extension to the existing Soutra quarry by Skene Group.

The archaeological field investigations were preceded by an environmental impact assessment undertaken by GUARD prior to the planning application, which had identified a number of sites of potential archaeological significance within the quarry extension area. In order to satisfy one of the conditions of planning consent, an archaeological evaluation was undertaken by GUARD in November 2010, which examined 10.85 % of the quarry extension area, targeting sites of potential archaeological significance in particular. The results of the evaluation determined that Soutra Hill Cairn, although badly disturbed, was prehistoric in origin and merited full excavation.

The subsequent archaeological excavation was undertaken by a team from GUARD Archaeology, led by senior project manager, Bob Will. The excavation, which was carried out over three weeks in some extremely harsh weather during January and February 2011, revealed an Early Bronze Age burial cairn at the summit with the remains of a small timber circle nearby. The cairn contained a cremation burial and fragments of Bronze Age Beaker pottery as well as charcoal and flint finds, all potentially significant archaeological evidence for the date, function and nature of the cairn.

Subsequent post-excavation analyses of this evidence over 2011 and 2012, revealed that this monument was built in the last quarter of the third millennium BC, during the early Bronze Age period. Two identical radiocarbon dates, of 1882-1686 cal BC, were obtained from the cremation burial, deriving from hazelnut charcoal from the cremation deposit and cremated bone itself, while another radiocarbon date of 2285-2036 cal BC from a charred hazelnut shell from the matrix of the cairn was earlier. These two separate date ranges suggest that there may have been at least two different phases of burial associated with the cairn. The recovery of beaker pottery sherds, which specialist analysis revealed came from two different pottery vessels further confirms the potential multiple burials that may have originally been made within the cairn. However, as the central area of the cairn had been so heavily disturbed by medieval and modern use of the cairn, it was not possible to determine if there had been a cist burial there. Several large stones that may have originally derived from a cist did survive to the east of the cairn close to a spread of charcoal-rich silt. The large portion of a Beaker pot indicates that a complete pot had been deliberately placed within the cairn while the sherd from the second pot may indicate a disturbed burial. However, both vessels and the flint tools recovered from the matrix of the cairn, could indicate more ceremonial or ritual aspects. Nevertheless, the evidence of re-use over a prolonged period of time demonstrate a long tradition, shared memory or a continuation of the use of this particular location as burial site. The construction of the cairn at such a locally prominent location was no accident and undoubtedly facilitated the identification of Soutra Hill as an important place in the early Bronze Age local landscape.

The full result of this research, ARO3: Soutra Hill: Prehistoric and Medieval Activity on the Edge of the Lothian Plain, was published in 2013 and is freely available to download from the Archaeology Reports Online (ARO) website - www.archaeologyreportsonline.com. 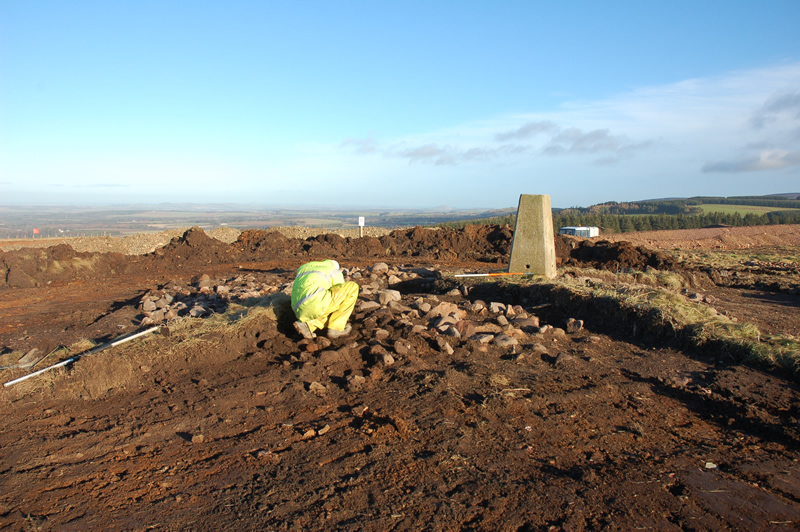 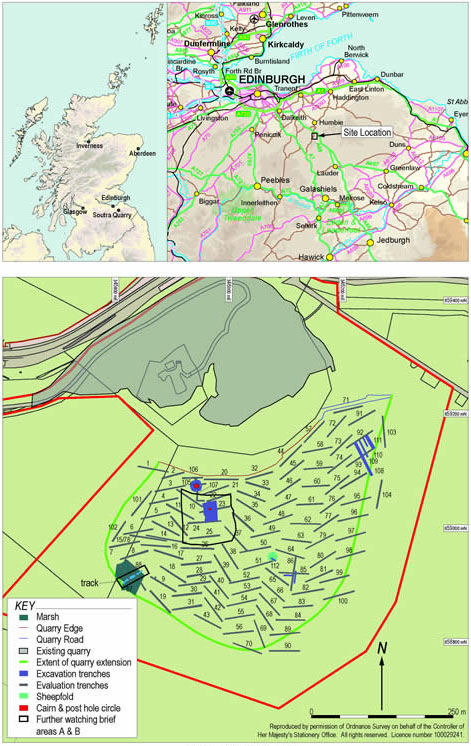 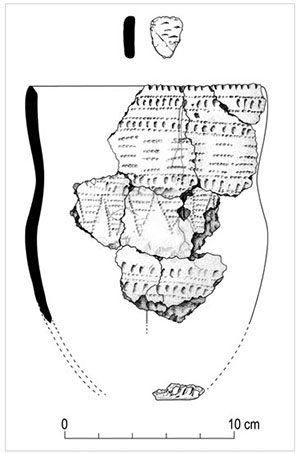 Pottery illustrations, profile of Vessel 1 (below) and decorated body sherd from Vessel 2 (above)