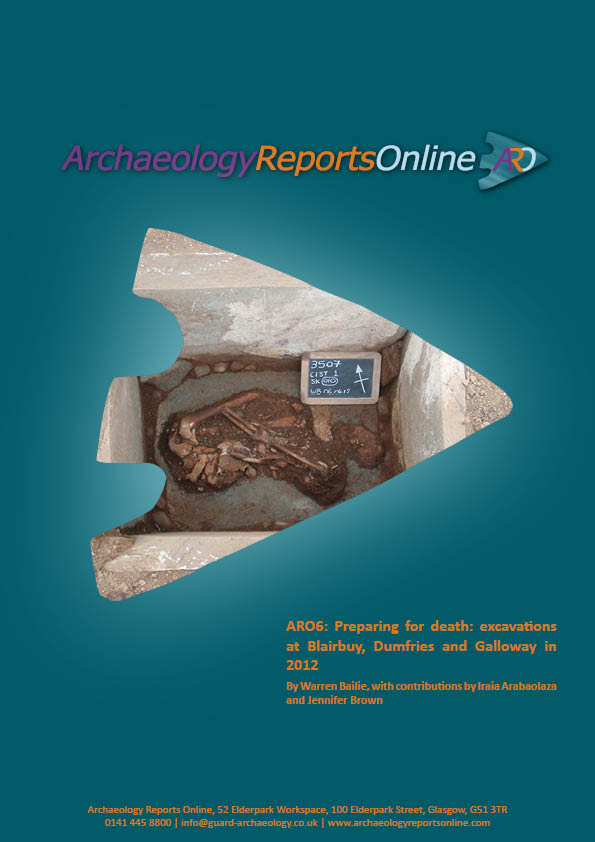 ARO6: Preparing for death: excavations at Blairbuy, Dumfries and Galloway in 2012

Archaeological investigations by GUARD Archaeology at Blairbuy Farm in Dumfries and Galloway has revealed evidence that cists in the Bronze Age may have been tailored for individuals during their lifetime, possibly from early in life.

The investigation began after a stone cist burial was accidentally damaged by ploughing in April 2012. A GUARD Archaeology team, led by Warren Bailie, was sent to investigate through Historic Scotland's Human Remains Call Off Contract. Warren's team found the skeletal remains to be that of a juvenile individual with an age estimate of approximately nine to twelve years old. This child suffered malnutrition, indicated by dental enamel hypoplasia (DEH) and cribra orbitalia, both childhood stress indicators. A radiocarbon date of 2027 to 1886 cal BC (2σ) was obtained from the left ulna, placing this individual's death in the early Bronze Age period.

The GUARD Archaeology team, however, also uncovered two additional empty cists. These cists were constructed differently in terms of both material and form. Samples from all three cists and the surrounding subsoil were tested using multi-element analysis and this indicated that the two empty cists had never been used for the burial of human remains, suggesting that they were possibly constructed in anticipation of use, rather than being constructed as and when required. Perhaps this was a conscious attempt by a group or family related to the young individual who was buried here, to set aside graves in the immediate vicinity for future use. The stress indicators on the skeletal remains may be indicative of a wider problem for the community at that time, perhaps a food shortage or onset of disease; this is a possible explanation which may have prompted the preparatory construction of the surplus cists. This implies that the community understood and planned an individual's burial practice well in advance of that person's death.

The full results of this research, ARO6: Preparing for death: excavations at Blairbuy, Dumfries and Galloway in 2012 has just been published and is now freely available to download from the Archaeology Reports Online (ARO) website - www.archaeologyreportsonline.com.