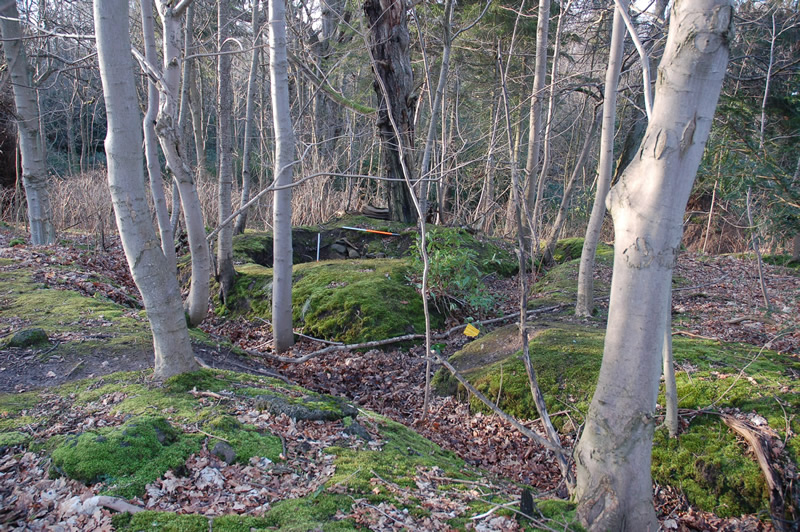 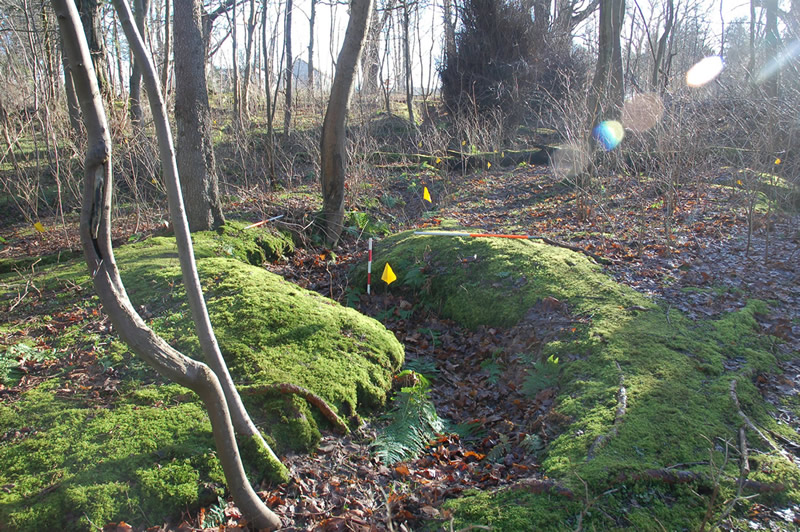 Survey of World War I training trenches at Dreghorn.

GUARD Archaeology Ltd along with the Centre for Battlefield Archaeology at the University of Glasgow recently undertook a survey of First World War training trenches in woodland adjacent to Dreghorn Barracks to the south-west of Edinburgh.

This work was commissioned by the City of Edinburgh Council Archaeology Service following discussions with the MOD's Defence Infrastructure Organisation and representatives of the local community. The trenches had been brought to the attention of the City of Edinburgh Council and the MOD, whose land the trenches occupy, by the daughter of Capt Gladstone-Millar who had taken part in training exercises at Dreghorn prior to being sent to France in 1915.

The GUARD Archaeology Team, led by Bob Will, discovered that the trenches extend over two distinct areas one on each side of the Braid and Howden Burns that runs through Dreghorn Woods and cover an area of approximately 400m. The best surviving examples of trenching are up to 1.5m wide and over 1m deep with fragments of corrugated iron sheeting supporting the sides. The trenches form dug-outs that are linked by trenches that zig-zag. The zig-zags are thought to be deliberate to give added protection to troops in the trenches from gunfire.

Over the 100 years since the MOD started using this land for training the woodland has been largely unmanaged and the trenches are now being affected by the growth of trees and bushes both inside the trenches and along the trench edges as well as gradual silting and erosion filling in the trenches and even undercutting the sides of the trenches. In addition the woods are now being used more for recreation purposes and footpaths are causing erosion and damage.

The preservation and recording of these remains has added poignancy due to the forthcoming centenary commemoration of the Great War and as such has been closely followed by the Army and enjoyed a high level of political and national and local media interest. The results of this survey work will be integrated into a new woodlands management plan for the woods and will it is hoped form the basis of a larger community based heritage project run by the City of Edinburgh Council, MOD & Army.

Dr Tony Pollard, Director of the Centre for Battlefield Archaeology said: "As we've worked with a team from GUARD Archaeology on WWI trenches on the Somme in France, it's only right that we should now turn our attention to the training trenches which soldiers dug before they went to the front. We look forward to learning more about the development of trench construction as the war progressed."

The War Department bought Dreghorn estate in 1913 including areas of the nearby Pentland Hills which are still used for training purpose. Dreghorn Castle was built on the south side of the river at the edge of the woodland in the 17th century before being re-modelled and extended in 1805 and was demolished by the army in 1955 after it fell into disrepair although a lodge house next to the bridge survived until 1970. The woodland had formed part of a designed landscape associated with the castle and elements of it can be discerned next to the river and in the woods.