GUARD Archaeology recently completed an archaeological watching brief at Yarrowford, near Selkirk and found the remains of what looks like a medieval village.

The archaeological watching brief was carried out on behalf of Scottish Water, along the route of a new water pipeline which traversed the site of the 1645 Battle of Philiphaugh and skirted the edge of a Scheduled Ancient Monument identified from aerial photographs as a possible Anglian settlement.

The GUARD Archaeology team, led by Alan Hunter Blair, kept a close watch as the machine excavator dug the pipeline in order to spot and then clean any potential archaeological features.

A number of wall foundations, cobbled surfaces and a hearth were discovered and recorded, as well as a jug handle of Scottish medieval redware pottery, datable to the 14 century AD and a decorated spindle whorl, which appears to be medieval too. The extent and quality of the archaeological remains likely represent part of a medieval village. It is expected that the forthcoming post-excavation analyses will make an important contribution to the archaeological evidence for rural medieval settlement in the Scottish Borders. 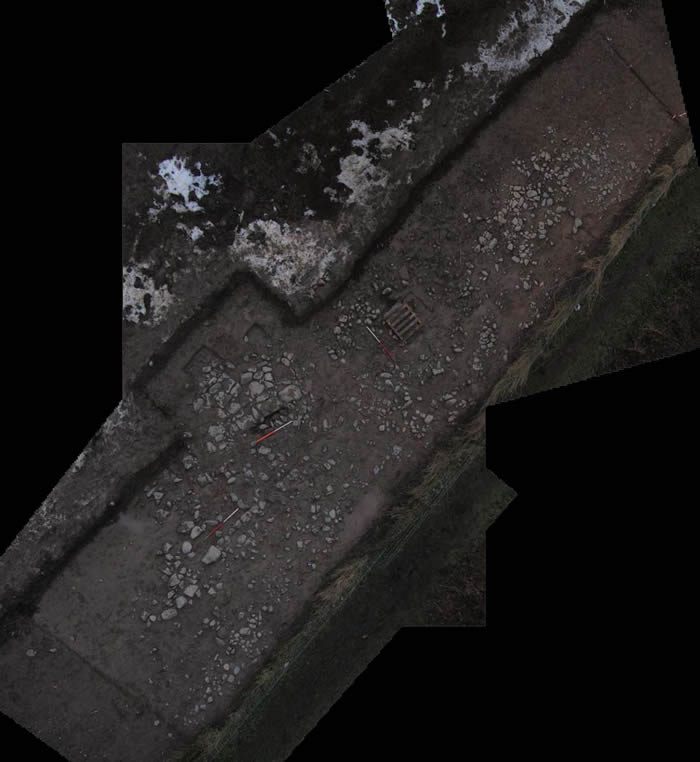 Aerial view of the site

One of the walls uncovered