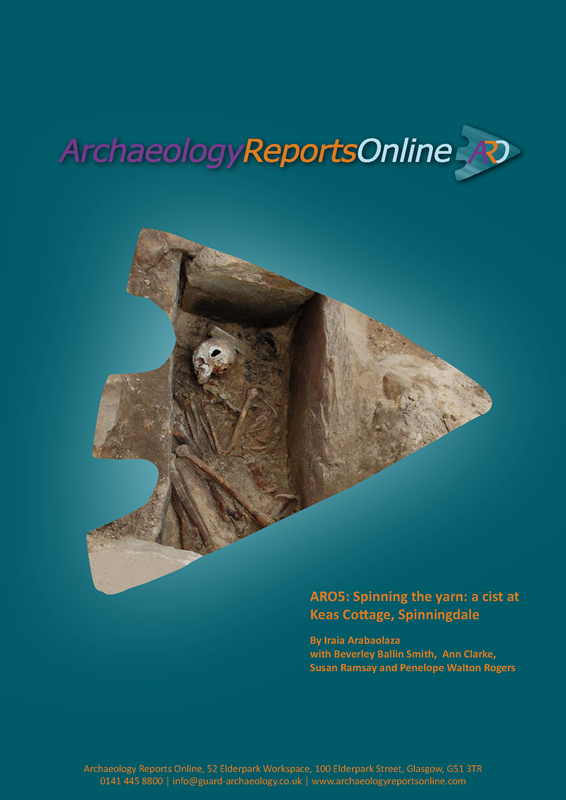 ARO5: Spinning the yarn: a cist at Keas Cottage, Spinningdale

When a prehistoric burial was accidentally discovered in September 2011 during the construction of a septic tank at Spinningdale in Sutherland GUARD Archaeology were called out to investigate and made an extraordinary find.

Through Historic Scotland's Human Remain Call-Off Contract, the GUARD Archaeology team, led by Iraia Arabaolaza, were commissioned to excavate a stone cist, built within a substantial pit, containing the remains of a crouched inhumation of a middle-aged adult female (35-50 years) with signs of spinal joint disease. A radiocarbon date of 2051-1911 BC and 2151-2018 BC was obtained from a bone and charcoal fragments respectively, placing the cist in the early Bronze Age period. A tripartite food vessel urn, of Early Bronze Age date, was placed to the west of her skull, but what made this burial a particularly extraordinary site was the discovery of sheep skin recovered from under the skeletal remains.

The sheepskin discovered within the left arm of the body is the first sample of this kind in Scotland and is the first known example discovered from a Bronze Age burial in Britain. There have been two other samples of Bronze Age wool found in the British Isles, but no other examples of potential sheepskin are known. Findings of hide or fur are few and far between in Britain but are often associated with 'rich burials' of adult inhumations.

Several other characteristics of this burial cist and its associated grave goods made this a significant site. The substantial burial pit in which the cist was constructed can be compared to other burials in Scotland but where the large pits may be related to later rituals. In contrast, the Spinningdale cist had been sealed and therefore represents an exclusive event of an 'individual' grave, which appears to be a rare type of burial.

The dating of the cist corresponds with the chronology obtained by the National Museums of Scotland dating programme for Scottish Food Vessels. The form and development of this type of vessel is complex, due to their limited number and the overlapping and interchange of stylistic elements with Beakers and urns. The vessel found here seems to lie further along the Scottish east coast than those previously found to date. It contained carbonised material of nonbotanical origin, unidentified cremated bone and a fragment of a small ring. All these elements indicate belief in the afterlife and were placed there to assist the individual's journey into the next world.

There seem to be a tentative geographical relationship of the cist and its contents with the Scottish east coast; represented by similar burial constructions and the eastern variation on the decoration of the vessel. The fact that the individual was facing towards the east, to the Dornoch Firth, which was perhaps used for communication and trade, emphasizes this perception.

The full result of this research, ARO5: Spinning the yarn: a cist at Keas Cottage, Spinningdale, is now freely available to download from the Archaeology Reports Online (ARO) website - www.archaeologyreportsonline.com.