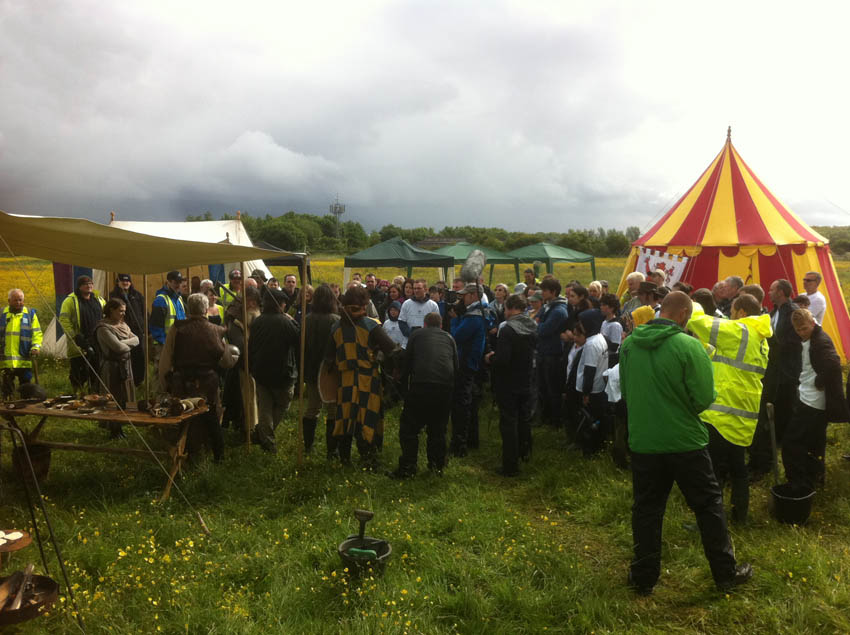 As part of an on–going community archaeology project investigating the battlefield of Bannockburn, GUARD Archaeology are looking for volunteers to get involved in a Bannockburn Battlefield Archaeological Dig next week!

We are planning on excavating test pits with residents in Cambusbarron from Thursday 22nd to Monday 26th August. This will be followed immediately by a wider metal detecting/test pitting survey along the Bannockburn at Redhall starting on Monday 26th August and finishing on Friday 30th August.

The site in Cambusbarron, which lies 2 km west of Stirling, that we are focussing on is the site of a medieval chapel, that may have existed at the time of the Battle of Bannockburn in 1314. If this was the case, the chapel may have been a destination for the fallen or injured after the battle. There are currently no obvious above ground indications of any structural remains of the chapel although residents in 1858 had recalled part of the ruins surviving then. Excavations for house foundations, some years before 1904, revealed a quantity of human bones, suggestive of a burial ground.

The investigations within the gardens of Birkhill Road in Cambusbarron will comprise the hand-excavation of one metre square test pits. The position of each of the test pits will be dictated by the resident to avoid any potential issues with reinstatement. In addition to the test pits in the residents' gardens we will also be supervising a small geophysical survey and excavating an area of common ground.

This is an exciting way to find out more about Cambusbarron's history through its artefacts. All volunteers will be supervised by experienced GUARD Archaeologists and guided in hand excavation, finds discovery and identification, recording of discoveries and dating of artefacts (if you find any!).

Even if you don't live in the Cambusbarron area, you can still get involved.

The Bannockburn Battlefield Archaeological Dig is being undertaken by GUARD Archaeology on behalf of the National Trust for Scotland, in collaboration with Glasgow University's Centre for Battlefield Archaeology, the National Trust for Scotland, Stirling Council and the BBC. Some elements of the work will be filmed as part of a BBC documentary to be shown in 2014, the 700th anniversary of the battle, presented by Neil Oliver and Tony Pollard.