Following GUARD Archaeology's collaboration with the Centre for Battlefield Archaeology Glasgow University (CBAGU) and local volunteers in investigating Cambuskenneth Abbey in 2012, we are pleased to report some post-excavation results of the work, which was funded by the Tread Right Foundation.

The Cambuskenneth archaeology project brought archaeologists, historians, metal detectorists, geophysicists and even a local poet, Elizabeth Rimmer, together with members of the local community to reveal evidence from the Scottish Wars of independence and later periods of conflict in and around the abbey and its environs. A key objective of the project was to engage members of the local community in the project; the professional archaeologists from GUARD Archaeology, led by Warren Bailie, provided training in a range of archaeological techniques to members of the public and local school groups.

The Abbey was founded by David I in around 1140, and was originally known as the Abbey of St Mary of Stirling. However, from at least 1201 onwards it was referred to as the Abbey of St Mary of Cambuskenneth (on the basis of Papal Bulls from Innocent III). The place name means the 'creek' or 'field of Kenneth', and is traditionally associated with a battle between the Scots under Kenneth and the Picts – this tradition underpins the location's position at the heart of the idea of Scottish identity.

The Abbey is one of the few places specifically mentioned in the near contemporary accounts of the Battle of Bannockburn. It was here that Robert the Bruce kept his army's baggage prior to the Battle of Bannockburn, though it is possible that this was also where supplies related to the on-going siege of Stirling Castle by the Scots were stored (it was to relieve the siege that Edward II brought his army to Bannockburn).

The Abbey was later the location for a series of important parliaments during the rule of Robert I. The first of these, in November 1314, saw Robert disinherit all the nobles holding lands in Scotland who were not present at the parliament; this included the sons of those who had died fighting for Edward II at Bannockburn, while any who were not present were judged to have declared themselves as Edward's subjects rather than Robert's.

The metal-detecting survey covered an area of 17 hectares across the fields to the south and west of Cambuskenneth Abbey. There were a total of 1044 finds retained; these included 36 coins, one of which was provisionally identified as a silver Henry III coin (1251-1272) and another was identified as an Edward I/II coin that was minted in London during the late thirteenth or early fourteenth century. Either of these coins, but especially the Edward I/II coin could have been in circulation and feasibly lost around the time of the Battle of Bannockburn in 1314, perhaps from booty taken from the defeated English army.

In addition 44 musket balls, dating to the seventeenth/eighteenth centuries, some of which were distorted or partial, were recovered during the survey. Dr Iain Banks and Dr Tony Pollard of the CBAGU had observed before the survey that the stonework of the northern and western walls of the Abbey Tower carry the distinctive scars created by the impact of musket balls. These are concentrated around the windows and similar patterning is visible at Stirling Castle and Linlithgow Palace. Was this target practice or was the tower caught in cross fire? The musket balls are most likely to date from 1650-51, either skirmishing relating to Cromwell trying to get past Leslie at Stirling after the Battle of Dunbar, or part of the assault on Stirling by Monck in August 1651. The musket balls varied in size from small shot of 5 mm diameter to larger shot of approximately 15 mm. CBAGU also noted that some musket balls had tapered sprues which suggests they were attached to powder bags. This would have enabled reloading from horse back suggesting they were from cavalry or dragoons which could also be indicative of a seventeenth date. Two possible cannon shot were also found, as were 22 buttons and 3 buckles, yet to be dated. Some of these items, like the Henry III and Edward I/II coins, could well have been dropped by soldiers involved in the Battle of Bannockburn in 1314.

As well as a metal detecting survey, a geophysical survey and the excavation of targeted test trenches over geophysical anomalies was undertaken. This revealed artefacts of potential medieval date, including a piece of carved stone detail, floor tile fragments and pottery which may be contemporary with the Abbey's twelfth and thirteenth century beginnings. Investigations also uncovered foundations of the watergate that once stood on the banks of the Forth, a means of the Abbey controlling access from the River at this point. It is not certain when the watergate was constructed but it was depicted in ruins on an etching by John Slezer dated 1693. 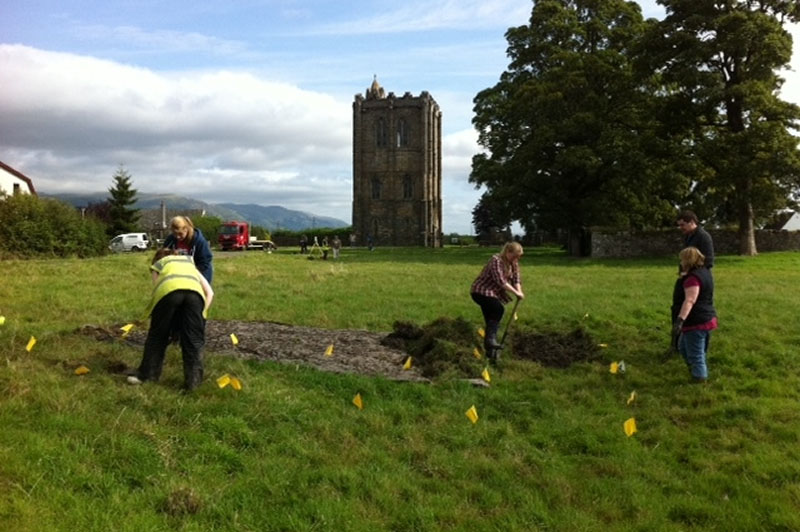 Volunteers breaking ground in the shadow of the abbey tower 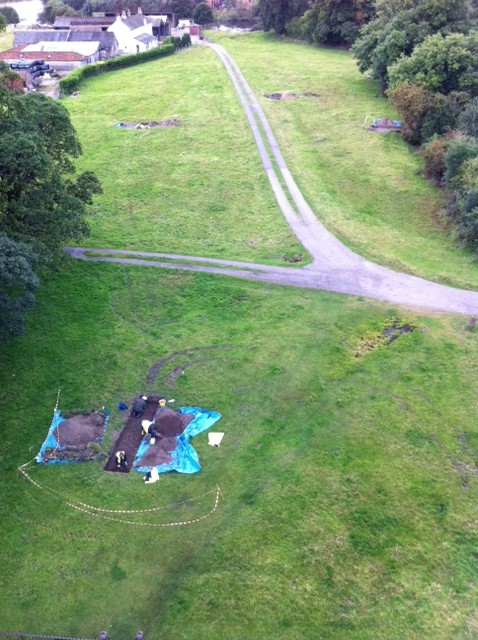 Archaeological excavations from the top of the abbey tower 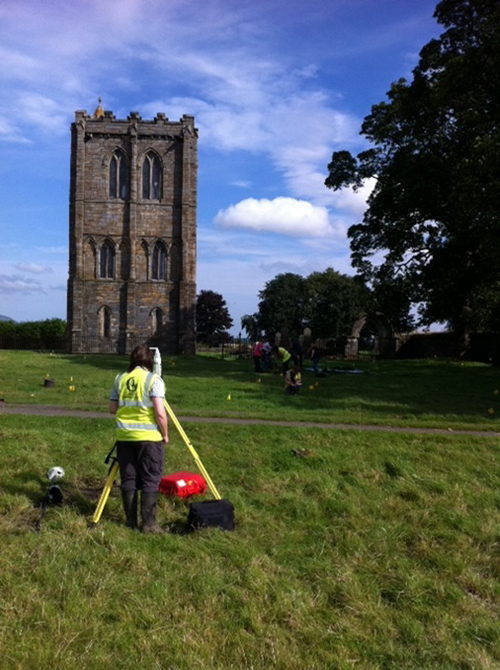 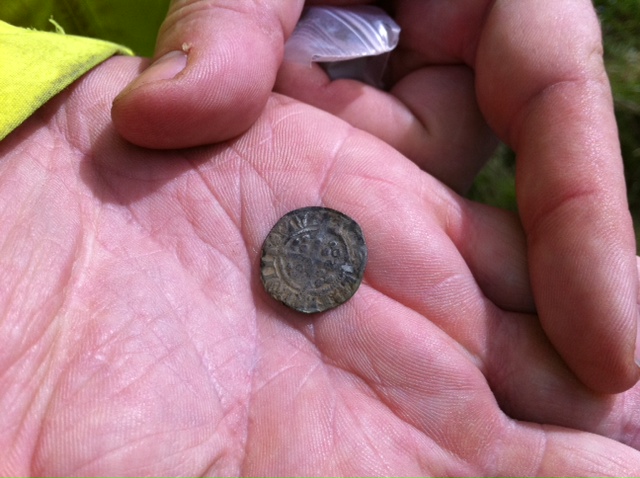 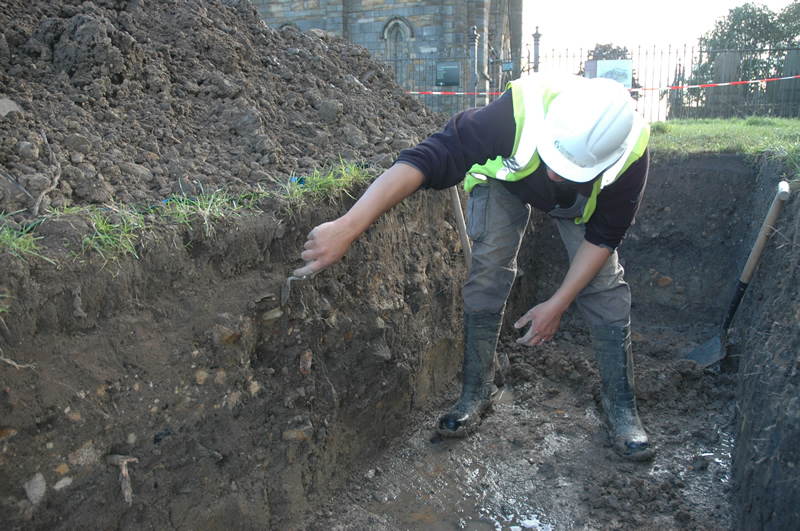 Cleaning up a trench near the abbey tower 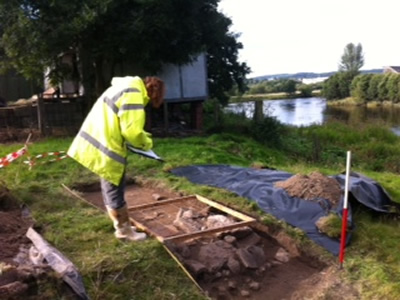 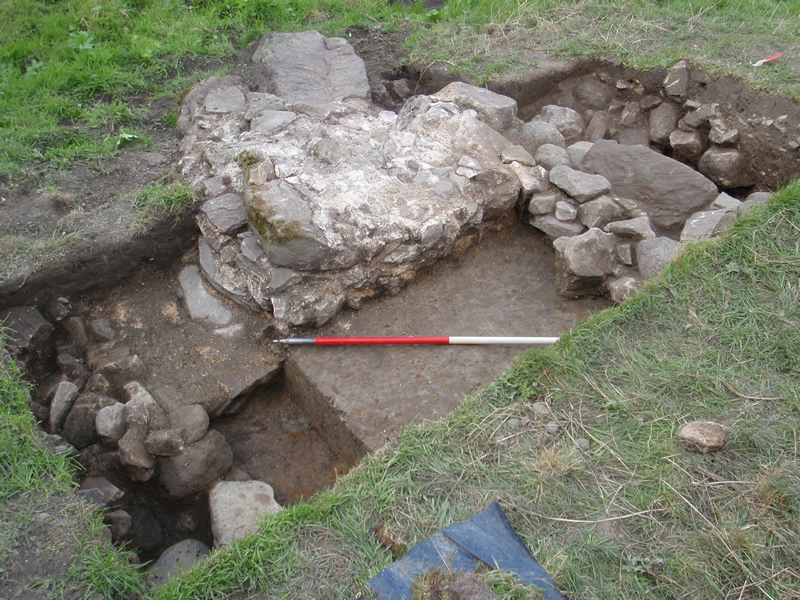